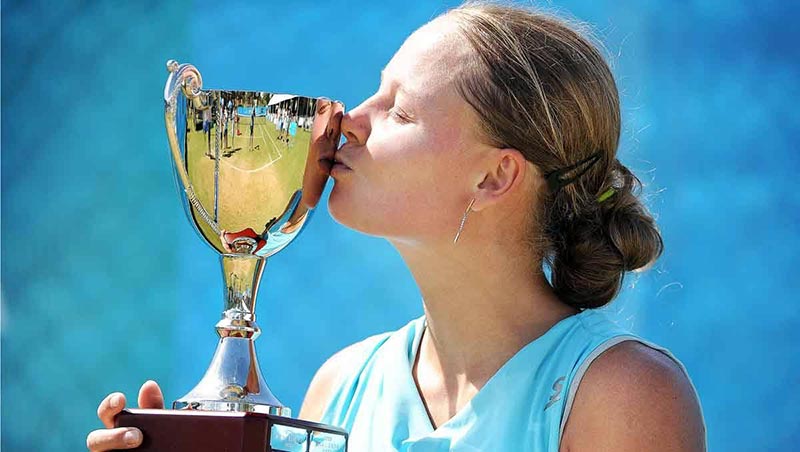 Ksenia’s story is both fascinating and inspiring; after growing up in Russia and dealing with hard times and misfortune, she achieved a goal many can only dream of; becoming a professional athlete.

Today, I’m privileged to bring Ksenia’s interview to the readers of our blog in the hope her story motivates and inspires people never to give up in the face of adversity.

Hi Ksenia, thanks for taking the time out of your day to speak with us. You have a fascinating story, so I’m hoping you’d share with the readers some background about your childhood and how tennis came about.

Tennis for me first started when I was 4 years old. I was very fortunate that my father gave up two University Degrees to become a tennis coach. Irina, my middle sister, who is 6 years older than me, had already started to play.

We grew up in Kazan, which is nearly 1000kms from Moscow, so we were certainly out in the wild LOL; There were only about a dozen kids playing tennis, and when you consider Tatarstan as big as France, that’s not many kids.

Today, a few tennis centers have been built, and in recent years, the city has even hosted some prestigious events, but the story was completely different back in 1994. Actually, the entire country of Russia was not what it is today.

Did you struggle to find or pay for expensive tennis equipment, and did you have accessibility to courts back then?

Growing up, I had absolutely no idea of the different tennis court surfaces such as hardcourt, clay, and grass. We played on asphalt with lines that my dad painted using some white paint he bought.

During summer, this was our reality, hot, dusty asphalt with the balls bouncing everywhere because the surface was so irregular.

As for tennis equipment that was seen as a real “luxury,” God knows how my parents were able to find and afford them; things like rackets and tennis shoes we take for granted now were just so hard to find back then. My sister and I were fortunate because we actually had one racket each; most siblings had to share.

Looking back, though, it was a very happy time playing tennis with my dad and sister and a few other local kids; it was hard, but we used to have a lot of fun.

At what stage did you start to become serious about playing tennis?

When I was 12 years old, I won my first tournament, and at the age of 14, I became the Russian National Doubles Champion. It was around about that time when my father decided to move out of Kazan because, as tennis players, we couldn’t grow anymore, we didn’t have access to good facilities like courts and gyms.

Also, because we lived so far away, traveling was never cheap; my parents always saved on things like food and clothing to help pay for my two sisters and me to keep playing; it was very tough on them. 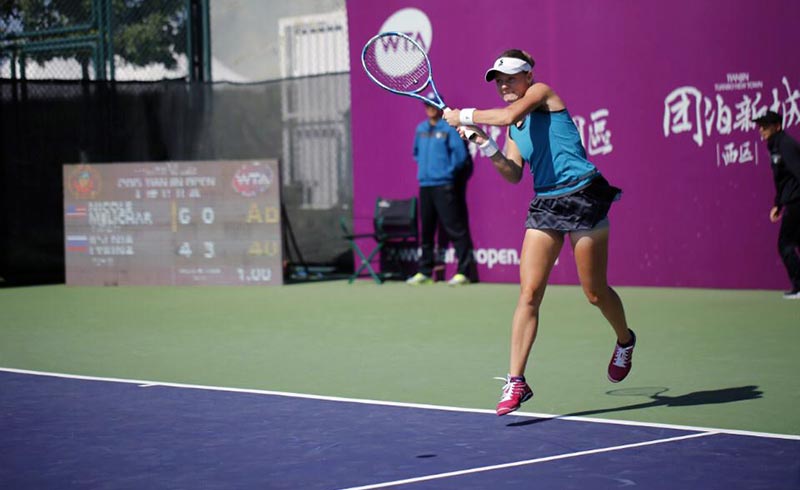 After leaving Kazan, where did the family move to?

In 2004 with basically no savings, dad decided to pack us all up, and we moved to Prague in the Czech Republic. In 2005 I became the Number 1 ranked junior in Europe for U/16s. In 2006 the Governing Body back home started to award players with partial sponsorship.

In 2007 I was the 4th ranked junior player in the world and won the Australian Open Grand Slam Junior doubles Title.

Oh boy, how long do you have, LOL? I transitioned to the WTA Tour in 2009 and pretty quickly ranked within the top 200 and won the Universiade Games. But not everything went as smoothly as that. Sponsorship was off and on, and I continually had to prove myself to get sponsorship.

It was stressful, traveling the world to achieve my goals; I knew my parents couldn’t keep paying for me. I’m not sure how we did it looking back, but somehow we managed to keep traveling.

It was nearly 10 years since we’d been back to Kazan, so it wasn’t easy because many things had changed; we didn’t have a place to live, dad didn’t have a job, and neither did Max. The hardest thing about moving back was the Governing Body wouldn’t allow me to keep working with my husband and dad; instead, they assigned me a coach from the Federation.

It took months before my dad was offered a coaching position and even longer before Max was offered a position. But even through all that time, Max was coaching me, and my dad was also helping. The sponsorship and funding were off and on; we never knew what would be covered, so a lot of the time, we were still paying for things out of our own pockets.

That is something very common in the tennis world. Top 200 players don’t make enough money to cover all the costs or to have a regular coach traveling with them. Going to the tournaments never knowing if you had enough money wasn’t easy; It put additional pressure on me and, to some extent, slowed the development of my game.

Then, in 2014, our hometown’s Governing body demanded we move back to Russia or lose our sponsorship. We had no choice.

In 2010 I married another tennis player Max Filippov, and since 2011 we have worked together as player and coach.

Between 2014 and 2018, I continued to play and had some excellent results, reaching the top 200 in singles again and reaching a career-high ranking of 108 in doubles. I also won the All-Russian National Championship.

It sounds like your parents played such a big role in not only your childhood but your tennis career too?

Tennis has been my life since I was 4 years old. It still is for now, but in a different capacity as a coach. Professional sport has so many challenges and sacrifices that need to be made. I know for sure that these days the talented juniors have more opportunities and more support, which is great to see.

My father held two University degrees, so I was also lucky enough to receive a good education; he believed school was just as important as tennis. We are still very close. Unfortunately, I’ve seen many tennis families split apart, which is sad.

Back then, when I was growing up, we knew so little or basically nothing at all about tennis, fitness, nutrition, travel arrangements, recovery, and so on.

But all that being said, I’m very thankful for my childhood as it challenged me, made me stronger, and strengthened the bond between our family.

What are some of the nutritional struggles you’ve faced over your tennis career?

I grew up with a lot of respect for food. The 1990s and early 2000s were not easy years in Russian history. It’s funny because people think I’m picky when I say I don’t eat or like certain foods like seafood or avocados, for example, but it’s just that I never tasted it growing up.

Growing up, we ate very simple foods, so the challenge early on was learning to play at an elite level with no real knowledge about the importance of nutrition.

When did you first realize how important nutrition was to your success as a tennis player?

Probably in my late teens. Twice a year, I would go for a health check which included body mass analysis. That helped me monitor my numbers. We also added vitamins and supplements to my diet under the guidance of a sports medicine doctor.

Obviously, the supplementation industry has come such a long way in recent years; when I was playing, the only real supplements were protein shakes and gels. Because of the constant stress on my body from playing so much and traveling week in week out, my immune system was always under a lot of stress.

Was there any specific nutrition plan that you used throughout your career, or did it change with the times?

I never had much of a plan. I would call it more of a routine. I definitely watched the timing of my meals. You need to make sure you have enough calories to train, play matches, and refuel within a certain time to ensure you don’t lose muscle mass.

I always had my “astronaut food” pack in my bag, as we called it. This included protein shakes, meal replacements, bars, gels, and an energy drink powder.

The only real no-no’s were things like fast food, sodas, and alcohol. Otherwise, it was just a well-balanced diet that included carbs, proteins, and some sweets, too!

Did you have a “special meal” you liked to eat before each match?

Of course! The night before I would prefer a nice steak or some chicken with potatoes. The breakfast before, I would try to eat some eggs; lunch would typically be pasta. I’m also such a sweet tooth, so I always had a treat after dinner; it just made me feel good.

What are some of the most challenging things about traveling on the professional tour and eating a balanced diet?

Not knowing the quality of food that will be supplied each week. Some tournaments are very well organized and provide players with quality food options. Usually, at the WTA level, there was never an issue.

However, the lower ITF level leaves the responsibility more to the players. It’s good if they provide lunch options; forget about quality, sometimes there were no lunch options at all. I remember one of the tournaments offered uber eats for Pizza Hut and McDonald’s for players; Imagine having a cheesy pizza before your match?

Other challenges were adapting to each country’s cuisine and customs. For example, you have to be very cautious of eating beef meat in China due to the high level of hormones it contains; there were cases when some players returned positive doping tests from eating that meat.

Another factor is the price of foods; some countries like Australia, Sweden, and Switzerland, are super expensive.

Now that you have retired, is there anything you have changed regarding your nutrition plan?

I definitely have more freedom now. And I can eat and cook whatever I want, especially because we don’t travel as much anymore. I still eat healthy, though, various meats, vegetables, fruits, and nuts. I still have an addiction to pasta and potatoes, though, Lol, but I try to exclude carbs from dinner because I exercise less now.

Ksenia, thank you so much for sharing your story with the readers of the SuperGreen TONIK blog. Your honesty and humor have been really refreshing to listen to and I’m certain the readers can take inspiration from your story.