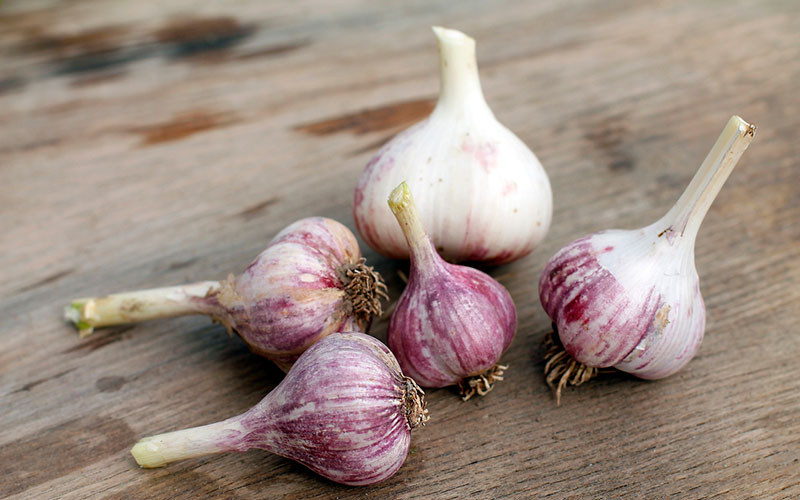 Garlic has been around for millennia, and its history is actually incredibly well documented, especially when it comes to its use in traditional medicines.

As far back as 5,000 years, they frequently used garlic in their meals and as a natural remedy for various conditions. Garlic is also used in many other countries worldwide and has a long history in the Middle East, Asia, and China. (1)

India and China, in particular, would treat those who were sick and diseased with garlic as natural medicine. (2)

Now, the average garlic bulb contains little to no minerals, protein, fiber, or vitamins compared to many other superfoods, so you might be thinking then, what is garlic actually good for?.

Garlic is jam-packed full of exceptional bioactive compounds, making garlic a potent powerhouse when it comes to traditional or naturopathic medicine. These bioactive compounds play a vital role in alleviating and preventing some diseases because of their medicinal characteristics.

Garlic is an incredibly rich source of allicin. You might be wondering where garlic’s pungent smell originates from; allicin is the culprit. Allicin was identified way back in 1944 by C.J. Cavallito, a well-known Italian chemist.

Over the years, several studies have been published on the effects of this potent compound. What was found was quite remarkable; apart from being odorous, allicin is antiviral, antioxidant, antimicrobial, can help the gut microbiome, and, finally, displays antibacterial properties.

A seminal study in 2010 concluded allicin that originated from garlic cloves actually killed colon cancer cells. Furthermore, a similar study found that not only did allicin kill colon cancer cells, but it could also be used to heal various other cancers such as bladder, prostate, and lymphoma.

However, the benefits of allicin do not stop there; this little powerhouse compound is the gift that just keeps on giving. Researchers found that allicin can also help to cure a common cold and some other viral infections. (3)

In one study, researchers found that participants in the study who consumed an allicin supplement over a period of 90 days were nearly three times less likely to be struck down by influenza, particularly during the winter months.

It’s also been reported that allicin can play a critical role in treating various infections, injuries, diabetes, diarrhea, and even heart disease.

Although the conclusion of the study is somewhat ambiguous, what is clear is that allicin has shown might in becoming one of the most bioactive compounds found in any food today.

And for one final benefit; Allicin makes for an excellent insect repellent. Garlic contains numerous sulfur compounds that several studies have directly linked to strengthening the heart and its health. In a study focused primarily on hyperlipidemia, researchers concluded that garlic was one of the 22 treatments for the condition.

Hyperlipidemia normally symbolizes high levels of cholesterol, and triglycerides are present in the bloodstream. Unfortunately, this can lead to severe conditions and diseases such as strokes.

So it makes perfect sense to start adding garlic into your diet today and watch your cardiovascular and resistance workouts go through the roof.

As with most vegetables, extreme or excessive heat can have detrimental effects on the sulfuric compounds contained within the garlic. Be sure to never “overcook” your garlic.

Black garlic has become very popular in recent years and is technically “overcooked”; however it goes through complex natural stages of fermentation during the process.

Now, believe it, or not garlic can be eaten raw if you’re up for the challenge; Somehow, I don’t think the team here at SuperGreen Tonik would appreciate it too much, though.

Wherever possible, try to avoid cooking garlic for longer than 15 minutes over very low heat. My favorite way to eat garlic is by crushing it or finely chopping it and adding it to dishes like curries and soups.

Another excellent method is to finely slice them and cook them on high heat for about 2-3 minutes or until they’re golden and crunchy like a little garlic chip.

When consumed as a single dose, garlic powder in the form of a 300mg tablet has been used three times daily for the duration of four years. This was used to treat or mitigate the hardening of the arteries.

150mg of a distinct garlic extract has also been used twice daily over the course of 24 months to treat hardened arteries. A unique aged garlic extract containing 1200mg was also used to treat the same condition; In this case, the supplement was consumed over 12 months, twice daily.

Also used to treat the hardening of arteries was a 300mg garlic extract in the form of a powder; this was administered four times daily over one year.

Apple cider vinegar can be quite sharp in its taste; some people add garlic, which helps reduce the cider’s tartness.

Garlic is also an excellent source of manganese, which is vital in strengthening bones; it also helps support the metabolism of some amino acids and carbohydrates. Garlic contains high levels of vitamin B6, which may assist in cognitive brain function and protect and strengthen our immune systems.

Garlic is also an excellent source of Vitamin C which has been shown to play many essential roles within our bodies and is a potent antioxidant. The vitamins C and 12 found in garlic also play a significant role in collagen and L-carnitine biosynthesis. This is essential for the health of our neurotransmitters.

Removing heavy metals from the body is vitally important, and garlic has been shown to help detoxify and remove harmful heavy metals such as lead. (4)

In a recent study conducted by an independent biomedical research laboratory in California, garlic extract was demonstrated to show considerable promise in detoxifying and reversing the accumulation of toxic plaque in the arteries.

﻿The study concluded that daily supplementation with garlic extract could dramatically reduce the quantity of soft-plaque buildup in the arteries.

Many of the volunteers in the study were already identified as suffering from metabolic syndrome. This can be a precursor for several risk factors associated with cardiac disease.

Let’s recap the benefits that garlic has to offer in terms of your physical and psychological health:(5)

For the vast majority of people, garlic has been proven to be safe. Research has shown that garlic has been used for as long as seven years without seeing any significant side effects.

There is the obvious and apparent bad breath that comes with eating garlic, but that also depends on how you cook it. Other possible side effects are heartburn, nausea, and body odor, and some people have reported a burning feeling in the mouth.

Garlic supplements come in many forms, some of which can be applied topically. Some kinds of toothpaste and mouthwashes contain garlic, and they have been safely used daily for periods of up to 3 months.

However, some people have reported a burning sensation when raw garlic is directly applied to the skin.

It’s apparent to see the potential positive effects consuming garlic regularly has on the human body.

With a long history stretching back as far as 5,000 years, garlic continues to amaze researchers in its ability to prevent, cure, mitigate or slow down the prevention of several diseases and conditions.

Garlic has been continually studied and researched for many years, and it’s not disappointed. Why not add garlic to your meals today and start reaping the benefits it has to offer.

One thought on “Garlic Extract And Its Amazing Health Benefits”