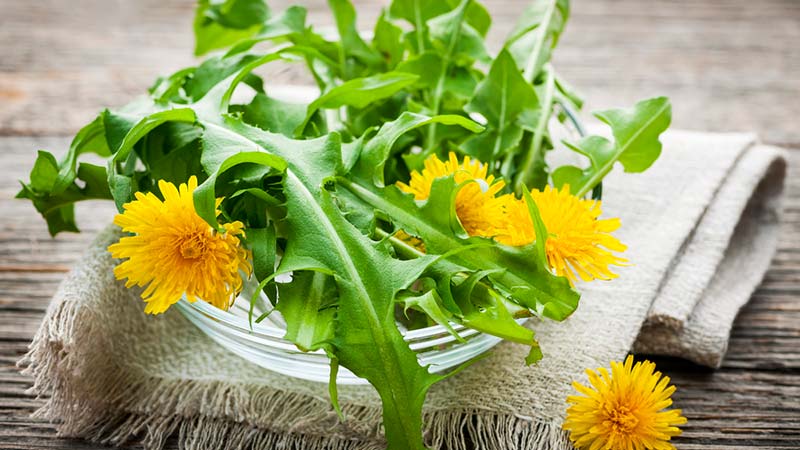 Dandelions are flowering plants that thrive in many parts of the world. Also known as Taraxacum spp., it is commonly frowned upon when you see them growing on your lawn. However, dandelions are known as treasures in the medical world as it can treat several ailments when eaten as a supplement.

They have long been used as a medicine to treat cancer, acne, liver disease, and digestive disorders. The numerous health benefits of dandelions is why we include this ingredient in our greens superfood formula.

Here is a list of health benefits that dandelions have.

Dandelions contain an abundance of nutrients and are actually comparable to the nutritional content in your typical vegetables. The entire plant is loaded with vitamins, minerals, and fibers, including the roots and even the flower. They can be eaten in its raw form and can be cooked as well; it is packed with vitamins A, C, K, E, folate, and traces of other B vitamins.

What’s more, they serve as a source of minerals like iron, calcium, magnesium, and potassium when consumed. People normally use their dried roots to make tea, although it can be eaten as it is too.

Antioxidants are powerful components that hinder the adverse effects of free radicals in your body by counterbalancing them. This property hence contributes to several health benefits that dandelions offer. Free radicals are extremely detrimental to your body and high levels of it may result in the onset of diseases and accelerated aging. This is when antioxidants come in to prevent them from functioning.

Dandelions have a ton of the antioxidant beta-carotene which is responsible for safeguarding your body from damaged cells and oxidative stress.

The onset of diseases may cause excessive inflammation to occur, and over time, it may lead to the permanent destruction of bodily tissues and DNA. Dandelions are extremely effective in countering inflammation due to the high amounts of bioactive compounds like polyphenols contained within the plant. Several test-tube studies have shown that dandelion compounds can successfully decrease inflammation markers in cells.

In another study that involved mice suffering from inflammatory lung disease, dandelion extracts enabled the reduction of lung inflammation. Due to the lack of human studies, dandelions have not been proven to help humans combat inflammation yet, though results seem promising.

The presence of chronic and chlorogenic acid in dandelions contributes to it being effective in reducing blood sugar levels. Test-tube and animal studies have proven that dandelions have successfully increased insulin production and increased the rate of absorption of glucose into muscle tissues.

Dandelions may lower cholesterol levels due to the bioactive compounds present in them, resulting in a lower risk of heart disease. A recent animal study revealed that consuming dandelions caused a significant decrease in cholesterol levels and triglyceride levels in mice.

Furthermore, a rabbit study also showed similar results when they were given dandelion roots and leaves on top of a high-cholesterol diet. However, there have to be more extensive studies done on humans to confirm its effect on human beings.

Due to the high content level of potassium in these plants, which is a mineral that contributes to decreased blood pressure, dandelions have been said to indirectly regulate blood pressure. However, foods high in potassium are the ones responsible for this effect and are not directly tied to dandelions.

However, the effects are still unclear due to the disparity in human and animal metabolism, and little testing has been done on humans.

8. May lead to weight loss

The bioactive components in dandelions have been hypothesized to help individuals lose weight and maintain a healthy weight. Scientists believe that the capacity of dandelions to increase carbohydrate metabolism and decrease fat absorption may result in weight loss, although results have not confirmed it.

While a study on mice has indicated some relationship between weight loss and dandelion consumption, more has to be done to determine if this is true and to find out the effects on human beings.

One of the more interesting health benefits of dandelions is the potential role it plays in battling cancer cells in different organ systems. A test-tube study showed that dandelion leaf extract managed to tremendously reduce the growth of cancer cells. However, it is worthy to note that extracts from the dandelion flower or root did not produce the same results.

On the other hand, other studies revealed that their root extract effectively slowed down the process of cancer cell growth in the liver, colon, and pancreatic tissues. Hence, the results are still relatively inconclusive.

Early research has proven that dandelion extract may effectively treat constipation and other symptoms associated with digestive problems.

A study confirmed that there was an improvement in stomach contractions which led to smoother bowel movements in constipated mice who were given dandelion extracts as supplements. Additionally, due to the presence of prebiotic fiber inulin in dandelion roots, dandelion extracts are indeed potent in reducing constipation and improving intestinal activity and movement.

Though dandelions boast of an endless list of health benefits, they cannot replace frequent exercise and a balanced diet to maintain a healthy and fit body, Furthermore, individuals should always consult their doctors before taking dandelion supplements to reduce the risk of any allergic reactions or the development of any side effects.